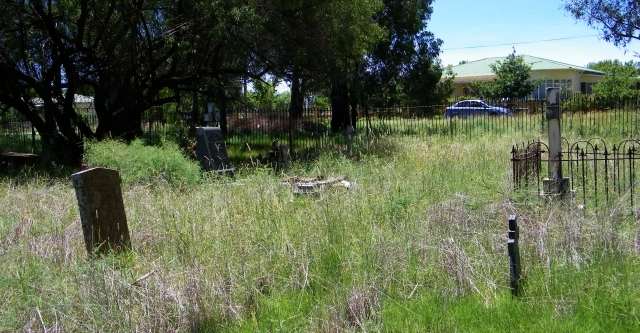 This small town on the NI between Kroonstad and Bloemfontein (geo-position: 28.0819°S, 27.1491°E and 1436 m abmsl) had some surprises for us. We had an hour or two to spare and thought on the way back from Winburg let's have a look into this place. We didn't expect to find much there, its just an other small town of the Free State vlaktes, so we thought. Soon after we turned off the N1 and driving down Eeufees Street we noticed a neglected cemetery, it turned out to be the old graveyard of the town going back to the 19th century. Certainly worth the stop and closer inspection.
It is now a few years later (October 2019) and I had another stop at Ventersburg. It provided an oportunity to update this page a bit more.

There is the fort, that is a place build under the leadership of P.A. Venter in 1858 for defense during the first Basutu war. He is also buried there on the outside of the enclosure. The monument inside is to the builders of the ford. The town was laid out in 1872 and proclaimed in 1876. The early beginning of the town can be traced back to 1859 when a congregation of the Gereformeerde Kerk (Reformed Church) was established on P.A.Venter's farm.

The Fort is a four walled defensive structure which was designed to keep people and animals protected in case of an attack by the Basutus. The story is written on the monument, translated what it says is: In memory of; our forefathers; at the request from; President Boshoff in 1856; defensive forts should be built at central locations; in case of war with the Basutus; the fort was used in 1866; and in 1858; the fort also served for defense in 1866 to 1868; against Mpandi and against the Basutus. I am not sure I have this 100% correct, some of the letters are hardly readable.
The construction is a wall forming a square of about 42 by 42m, enclosing an area of 1700m2. It is about 2.5m heigh and around 0.7m wide at the bottom. Holes near the top are provided to shoot through, a gate on one end was to allow the wagons in. It was an amazing construction at the time considering the tools and the manpower available.
Some quick estimates showed that the total mass of the wall is about 1000 tons, and this had to be carted here by ox-wagon. The carrying capacity of an ox-wagon is about 2 tons, thus 500 trips had to be made.
Just outside the wall is the grave of PA Venter, the leader of the building program. The grave stone reads (semicolon represents a line break): HIER RUST; ONS GROOT; OUDERS EMIGRAN; TEN; P.A.VENTER; OVERL. 26 DEC 1857; W.O.F.VENTER OVERL. 1860; W.C.VENTER; A.J.VENTER; EN ANDERE; BLOED VERWANTEN; OD 19 V 25. Translated: here rests our emigrant ascendants, PA Venter, died 26 Dec 1857, WOF Venter, died 1860, WC Venter, AJ Venter, and other blood relatives. The last line most likely refers to the date the monument was erected, 19 May 1926. Thus not only is PA Venter buried here, but also other family members.

The Gereformeerde Kerk (Reformed Church) is one of the three sister churches of the Afrikaans churches. It must have had a strong following here because the congregation was formed already in 1864. And a church was built and completed in 1871 on land obtained from PA Venter, the same stand where the present church is situated. That was even before the village was proclaimed in 1876.
During the Anglo Boer war the church was burned down by the British. It was replace by a new, bigger church after the war. Inauguration was in April 1913 and it's cost £1577. That is the one still in use today. The picture on the left shows the building not long after it had been completed. An interesting detail of the building is that it was built using sun dried mud bricks. To keep them from disintegrating it is necessary to keep them ventilated. The necessary ventilation holes can be seen on the outside and inside. That method certainly works, the building is still standing without cracks 110 years on.

The Winburg congregation of the NG church was formed in 1843. For people living in this area it was not possible to attend church services because of distance. It was common that small groups would come together to hold services on Sunday. This would have been the case also in the Ventersburg area. In 1878 the group belonging to the NG church bought four stands from the Reformed Church and were given another four as a gift. A small church was erected in 1880 to serve the community. In September 1890 they were strong enough to cede from the Winburg congregation and become the Ventersburg congregation. The first minister was called, that was PJJ Boshoff who served from 1892 to 1995.
The church building was destroyed during March 1901 by British troops, with it also most of the church records. And not only that, the minister at the time, PJ Snyman, and some of the members of the congregation were taken prisoner. During the first council meeting after the war it was decided to erect a temporary building of corrugated iron as a provisional church. It served the community until 1912 when enough funds had been accumulated to start on a new church.
This church, which is the present building, was erected on the location of the old church. The architect was William Henry Ford and the cost £9000.
Just as an aside, a wonderful story about a beaker used for holy communion. The set of beakers was removed by British troops from the church and were taken to England. This specific beaker was found in a pawnshop in San Francisco in the USA. It was inscribed 'Taken from Boer church, blown up by British shell, during an engagement with the Boers, at Ventersburg Orange Free State March 1901'. Fortunately the person who had 'discovered' the beaker had a relative living in South Africa, this way it found itself back to Ventersburg in 1992 and is now in the display cabinet with various other items from the old church. 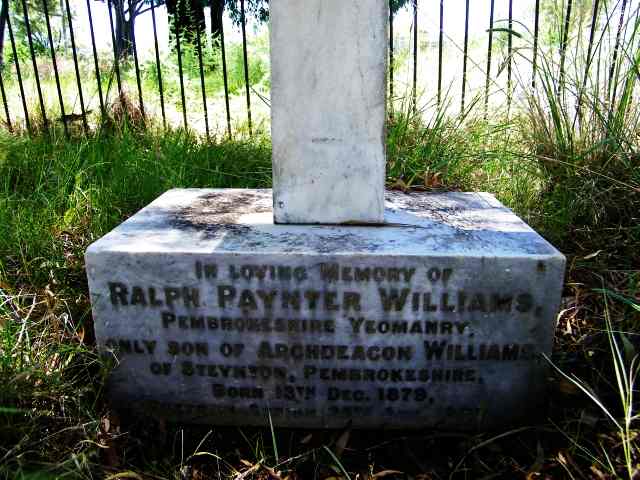 This first stone shown is from the Anglo-Boer war, the lines read:
In Loving Memory of
RALPH PAYNTER WILLIAMS
PEMBROKESHIRE YEOMANRY
ONLY SON OF ARCHDEACON WILLIAMS OF STEYNTON, PEMBROKESHIRE
Born 13th Dec 1879
killed in action 25 Aug 1900.

Here is what the Internet has to say about him: Although not a qualified Veterinarian he volunteered for military service while still a veterinary student. He came to South Africa during the Boer War as Farrier-Sergeant (No. 4123) with the Pembrockshire (9th Battalion, Imperial Yeomanry) Regiment and was one of the first of his regiment to be killed in action. His death took place near Ventersburg, Orange Free State on 24 August 1900. 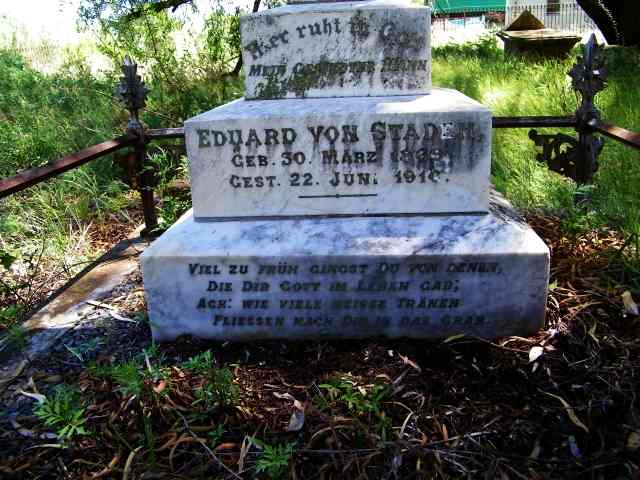 Translation (sorry, doesn't rhyme that well in the translation):
Much too early have you departed
from the loved ones given to you by God;
Oh!: how many hot tears
are running down into your grave.

The reason I liked this one is because I often get quite cynical when reading some of the verses on grave stones, this one I thought was beautiful and very fitting to the situation as I imagine it.